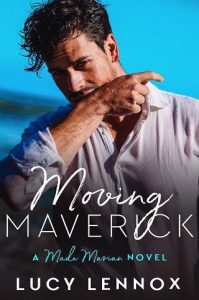 Enjoy the Made Marian series in bundle format. Included in Made Marian Volume Two are the following three titles:

Griff: I learned early on that the easiest way to avoid a broken heart is to always be the first out the door. Caring about anyone or anything is asking to be disappointed, which is why I avoid relationships and chase freelance gigs — ghost writing restaurant reviews and penning articles about the efficacy of cheesy pick up lines — instead of chasing my dreams.
Besides, dreams don’t come true for people like me. And no one, not even the sexy-as-hell bartender at the club can convince me otherwise. Because I’m never risking my heart again.
Sam: As a bartender I’ve watched a million pick-up artists work their magic, but none as talented as Griffin Marian. He’s a flirt, a good time. Hooking up with him was supposed to be just a fling. I wasn’t supposed to care abut his fractured past or his buried dreams. I have my own future to worry about, especially after that stupid food critic scuttled my hopes of finally opening my own restaurant.
But, the more time I spend with Griff, the more I’m beginning to realize that my plans mean nothing without him. If only I can convince him to give us a chance to follow our dreams together.

Maverick: I haven’t been back to Rabbit Island, South Carolina, since my parents died and my grandmother, Mimi, rejected me. I’m only returning now to attend her funeral and sell an estate I never wanted. But the moment I step foot on the island and fall into Beau’s arms, I realize it might not be so easy to say goodbye after all.
Beau Talmadge was always the boy next door, but now he’s no longer a kid. The man is hot as hell and pushes all my buttons in the very best way. I’m supposed to leave in a week. Sell everything, close the door on my past, and walk away forever. So why am I letting myself fall for someone who lives thousands of miles away? And how the hell am I going to break it off when it’s time to go?
Beau: It took one short summer to fall in love with Maverick Mitchell and fifteen long years to forget him when he left. I’d never expected to see him again, but when he shows up at Mimi’s funeral looking lost and lonely I can’t resist doing anything I can to comfort him. Falling into bed with Maverick is easy and the nights we spend together are as hot and steamy as a South Carolina thunderstorm.
I know it’s not smart. I know it’s not what he planned. But dammit, Mav belongs in my arms, in my bed, and in my life. So how the hell do I get him to stay?

AJ: I know Dante’s story better than anyone. After all, I was the one who rescued him from his homophobic, abusive father eight years ago. Since then, I’ve kept my distance, but when I run into him at the Marian House gala and he doesn’t recognize me, I can’t resist the incredible, sensitive man he’s become.
I would do anything to protect Dante Marian, but what if his past keeps me from being part of his future?

Dante: Every new relationship has obstacles, it just turns out that ours involves my bumbling inexperience (ugh), an octogenarian naughty toy party (don’t ask), and being on the run in an RV with Aunt Tilly (it involves the Secret Service— no really, don’t ask).
When my biological father takes his homophobic views to a national platform, the only way to stand up for what I believe in is to claim my past and confront him. So now it’s time to decide: do I put the past behind me and walk away from AJ for good or face my biggest fear and fight for what’s mine?