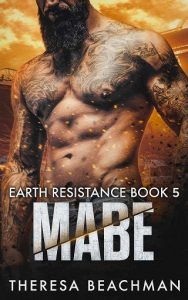 Once, he chose duty over love.
He won’t do it again.

Virologist, Sarah North, wants revenge. Emotionally scarred after watching the aliens slaughter her entire team, she has engineered a viral weapon, one with the potential to wipe out the hated insectoid invaders. But her plan needs brawn as well as brains, and to make it work, she will have to accept the help of a rugged, brown-eyed man.

Vet, Eli Mabe is a broken man. The Chittrix took his family, and he hasn’t forgiven himself for letting it happen. He fights with Earth’s resistance, fueled by survivor guilt to rid the world of the invaders.

But food is in short supply and time is running out and an end to the war has never seemed further away. Forced into an uneasy alliance by life-threatening events, Mabe and Sarah will attempt their greatest challenge yet, capturing a Chittrix—alive.

But as they fight for their lives and their planet, can Mabe convince the brilliant scientist that the future can hold more for them than bloodlust and vengeance?