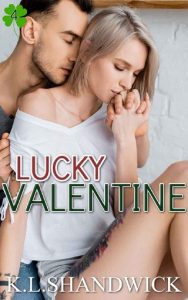 Everyone knew who Daisy O’Donnell’s famous boyfriend was, but only a privileged few knew that she was his girlfriend.
Could you keep that a secret?
Rock star boyfriend, Jamie Fontaine and his barmaid girlfriend from Dublin did—for almost a year.

However, with several near misses, Jamie felt the time had come to declare his love for his girl to the world. Where better to do this than during part of his band’s tour in a far-off foreign country. Combining his work with a romantic Valentine’s weekend in Paris, he made the best of the plan, but when he confesses his love for his girl, it’s Daisy who’s left facing the music, in every sense of the word. When the couple’s relationship became common knowledge among the band’s entourage, did feisty Daisy live up to the feisty reputation Jamie knew her to have, or did she fold when challenged by those who thought they knew her man better?

Lucky Valentine is book four of the Luvluck Novellas series. If you love a hunky rock star, a sassy female lead, and a romantic comedy with a smidge of steam, this book is for you. Buy Lucky Star for a fun, laugh out loud, opposites attract Amercian/Irish romance!