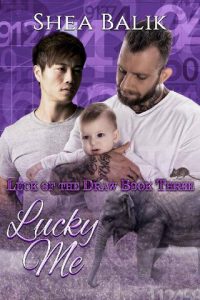 The paranormal world was slowly becoming extinct and the leadership, the Consilium, were desperate. A plan was hatched to put a spell on all singles to mate them with someone from the opposite sex in order to procreate. All they had to do was draw a name out of a bag and the mating bond would begin. They were positive their plan couldn’t fail. Then again, they had no idea the fates had been watching and decided paranormals, especially the Consilium, needed to be taught a lesson.
One that wouldn’t soon be forgotten.
Keyln Rao had grown up with the hope that he wouldn’t have to endure the ancient Indian tradition of an arranged marriage. He was wrong. Not only had his father found him a woman to marry, he was making her father refill their depleted funds. So, when the Consilium announced he would have to marry the name he picked from their bag, he didn’t really care. Either way, it seemed as if he wouldn’t find his fated mate.
Shaw Jackson had forged his own path despite family ties that had tried to reel him into one he refused to participate in. He’d been ready to find his mate, but he hadn’t expected the man to knock on the door with the Consilium telling him he needed to pay for his mate. Refusing to allow his sweet elephant shifter to be used as a pawn, Shaw refused to give anyone money. He might be a mouse shifter, but that didn’t mean he wouldn’t kill anyone who tried to come between them.
Fortunately, the pair have the fates on their side. They’re going to need them if they hope to stay alive.