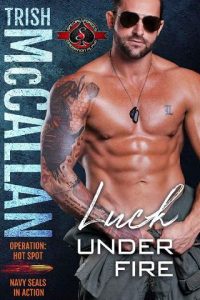 A captured, tortured, and dying Navy SEAL… His mysterious and lethal savior… A soulless oil baron who will stop at nothing to satiate his greed…

When Luck Goes AWOL
Dylan King’s—Lucky to his SEAL brothers—legendary luck has finally run dry. Captured by Amaru rebels during a mission gone FUBAR, he’s facing certain death. His body broken, his eyes blind, he can’t escape on his own, and the rebels have made sure his teammates will never find him. But then he hears a voice. He might be blind, but his ears work just fine. And that’s a woman’s voice. A young, American woman. Exactly the kind of prey the rebels traffic in. Even if she frees him from his chains, she’ll never get him to safety before the rebels return. By trying to save him, she condemns herself to death. He tries to drive her away, knowing that when she leaves, she takes his life with her.
But this is no ordinary woman. And she’s far from helpless.

When life loses meaning
Andressa Almeida is in the rebel camp for one reason, and it isn’t to rescue a broken and dying man. She’s barely staying ahead of the pig who slaughtered her entire family. Freeing this man and taking him to safety could cost her her own life. And she’s not yet ready to join her family on the other side. Her vengeance is not complete. But when he tries to save her life, at the expense of his own, she knows she can’t leave him to such a slow, agonizing death.
At the crossroads of luck and loss, deep in the Amazon Rainforest, love slowly grows. A man with no luck is given his greatest prize of all. A woman with nothing to live for is offered a life worth living.

But a powerful enemy is gathering his forces and hunting them down. He’ll stop at nothing to take what he wants and punish those who defy him.