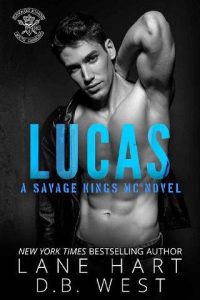 Lucas Bennett hasn’t been able to catch a break lately.
At the top of his growing list of disasters is the ongoing feud with Jake, his former best friend. It hasn’t helped that the two are also prospects competing against each other for the single spot with the Savage Kings MC.
Lucas thought his luck was finally changing after he makes a courageous rescue, saving a beautiful woman from two huge guards and the evil man holding her hostage.
But, as it turns out, he screwed up and saved the wrong woman.
As if that wasn’t bad enough, the girl he helped escape just so happens to be the younger sister of the club’s current enemy.
Taryn Hawthorne is fed up with being locked away from the world her entire life and treated like a child. Even her future has been decided without her approval. In two months, she’ll be forced to marry a man she’s never met. So, when a stranger shows up and offers her a way out, she jumps at the chance.
Once Taryn is free, she insists that she’ll never return home. That decision could very well start a war between her family and the Savage Kings MC.
Lucas didn’t sign up to be anyone’s babysitter, and yet, he’s stuck not only protecting Taryn but making sure she doesn’t run away, all with one simple warning – don’t lay a finger on her. She’s a handful, trying to fit twenty years of confinement out of her system in a matter of days. Worst of all, Taryn won’t stop trying to seduce Lucas, tempting him with what he can’t have. He’s still getting over a broken heart and isn’t ready to get burnt again even if she wasn’t off-limits.
When the Kings find out that the man Taryn is supposed to marry is looking for her, killing anyone who gets in his way, she’s terrified of being a prisoner once again. Lucas vows to keep her safe, and not just because it’s his job.
It may be the biggest challenge of his life, but he can’t fathom losing her.
Taryn is his to protect now and forever.