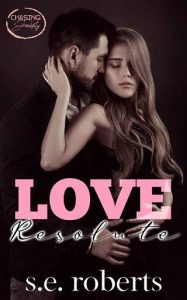 It was supposed to be a trip to the States for her brother’s wedding, but it turned into so much more for Freya. While her last long-term relationship didn’t end well, the last thing she needs is to jump into another one. On New Year’s Eve she makes a resolution: Forget about past hurt and find happiness again. Enter Briggs, her brother’s best friend. He’s completely off-limits and lives on the other side of the world, but the heart wants what the heart wants. However, will he still want her when he discovers her secret?
Briggs promised himself that he’d never settle down because he feared he’d end up like his father. He goes to work every day and has fun on the weekends, but that’s as far as he’ll let it go. That is until he meets his best friend’s sister, Freya. He knows he shouldn’t go there, but she’ll be going back to London soon enough, so there’s nothing wrong with a little New Year’s fling, right? Once she’s gone, he’ll forget about her and go back to hooking up with random women. At least that’s the plan until he realizes he’s falling in love with her. When she leaves without saying goodbye, he’s worried he’ll never see her again.
It’s a new year and Freya and Briggs both deserve to fall in love. Will they get their happy ending, or will they be torn apart forever?