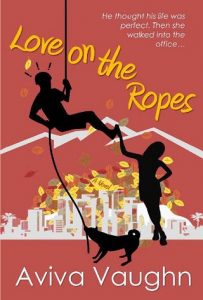 He thought his life was perfect, and then she walked into the office

Former TOPGUN pilot Clint Davenport is the newly-crowned prince of public radio now that he’s hosting America’s most popular drive-time show. The ladies can’t get enough of this Flying Ace, but he’s all out of runway for the fairer sex because of a tragedy that haunts him. But life is perfect, or at least that’s what he keeps saying. Until he finds himself on the ropes (literally) at a company retreat and the only person who can bring him in for a safe landing is his office frenemy, who seems as comfortable in a climbing harness as he used to be in an F-18.

Erin Hung was twenty-eight and still living with her parents in Honolulu, so when her favorite cousin invited her to move to glittering Los Angeles, she made the leap. After four years, this late bloomer has blossomed. She owns her own condo in gorgeous Pasadena, has the love of a good male—her Shiba Inu, Atticus—and is the badass marketing manager for America’s #1 radio show. But she still has a lot to prove and is gunning for a promotion. She doesn’t have time for distractions, especially romantic ones…and there’s no way she’s interested in that cocky ex-fighter pilot who just got tapped as host. Unfortunately, working with Mr. Cockpit Cockypants is the only way to get her raise.

When work forces them together, it seems like the beginning of a new Cold War, or maybe Clint’s high-flying charm is just what Erin needs to see there’s more to life than just work.