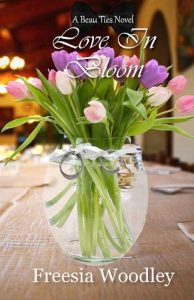 Montana Girard is not looking for a relationship. Having lost his husband two years ago, he has his hands full running his florist shop and raising his three daughters alone. When he meets Rohan Pittman, the attractive venue owner, feelings he thought had died with his husband stir to life, throwing his life off kilter. He can’t understand what has drawn him so fiercely to the honey eyed manager, but he can’t have any of it. You only get once shot at true love and he had his already.

Rohan Pittman is utterly enamored by the green eyed giant that showed up to deliver flowers for an event. He is everything Rohan has been looking for in a man and he wants him badly. The knowledge that Montana has a passel of kids does not deter Rohan. In fact it makes him want the man even more as Rohan is wanting to settle into family life. What does give him pause is the knowledge that Montana is still holding on to his husband who passed two years ago.

As these two dance around their mutual attraction, tragedy strikes and now Montana is in need of help. Rohan is all too eager to step in to save the day and see if he can win Montana’s heart in the process. Will Rohan be able to break past Montana’s grief so they can build a life together or is the specter of Montana’s husband going to keep them apart?