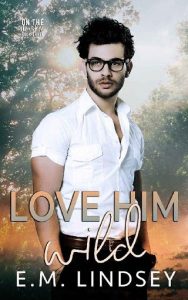 Love Him Wild (On The Market #3) by E.M. Lindsey – Free eBooks Download

The first time Parker Alling set eyes on his future husband, he was eight years old, and he punched him in the face. It was the moment his life with Ronan Hedrek was tied together in knots that could never be undone. Of course, things weren’t always easy. Guilt tried to tear them apart, Ronan’s Multiple Sclerosis diagnosis threw a wrench in their future plans, and Parker’s fear that Ronan would never love him enough was always present. But in the grand scheme of things, none of that mattered, because Parker and Ronan finally had their happily ever after.
Then Jonas Woods came to town.

Jonas had lived under the heavy, pressing, cruel thumb of his father for most of his life. In spite of that, Jonas grew up kind, and it crushed him every time he was forced to enter a small town, knowing the havoc his father’s company will wreak when he’s done with his million-dollar condos and corporate shops putting all the locals out of business. Jonas does what he can to soften the blow, but his power only extends so far. Still, he’s determined to save Cherry Creek, and his resolve is only strengthened when he meets the town’s reluctant but sweet Park Ranger who isn’t sure what to make of the young man claiming that he wants to help instead of ruin.

Parker is captivated by just how quickly Ronan falls under the younger man’s spell. Instinct tells him to protect what’s his, but his heart is telling him there might be room for one more person in their lives. Jonas is determined not to be a homewrecker, and Ronan is determined to guard the integrity of his marriage, but Parker thinks their happily ever after isn’t quite as finished as he once thought.
Jonas’ trauma keeps him reluctant to believe he’s wanted, but once Ronan is on board, Parker is certain they can convince him that their love is worth the risk. The only question is, will that quiet, reserved man finally let Parker and Ronan love him absolutely wild?