Home
Historical Romance
Love Ever After by Cheryl Holt (ePUB) 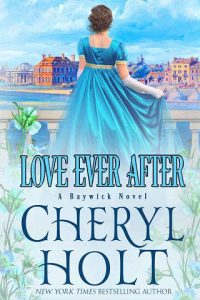 Love Ever After (Baywick #2) by Cheryl Holt – Free eBooks Download

CHERYL HOLT takes readers on another lovely, dramatic, and romantic holiday excursion to the pretty seaside town of Baywick…

Captain Jackson Pettigrew is a sailor whose recent expedition to the Arctic North ended in tragedy. His ship sank, and he was lost for years and presumed deceased. He returned to England, only to find that his wife had died while he was away, after giving birth to another man’s child. He’s jaded and wary, and he’s forgotten how to trust. The world is moving too fast, and he can’t find his balance.
Mary Darlington owns and operates an unusual, females-only hotel. It caters to young ladies who would like to travel, but who don’t have male family members to escort them. Her reputation has to be beyond reproach so guests feel comfortable staying with her. She would never engage in any conduct that might reflect badly on her stellar character. She suffered her own past tragedy, and it’s left her jaded and wary too. She’s surrounded herself with women, so no man can breach the walls she’s erected to protect herself.
When Jackson meets Mary, sparks ignite and passion flares. They seem to be a perfect match, but they’ve both been battered by life, and they can’t bring themselves to grab hold of the future they could have. But Fate works in mysterious ways, and sometimes, a person can find true love just when he or she needs it the most…