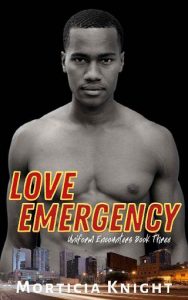 The ER doctor is smoking hot, and the sexy, young paramedic can’t keep his eyes off him. But will a Phoenix kink club and bomb threat kill their prognosis of love?

Paramedic Terrence Samuels loves a good time, especially at Sinsation—Phoenix’s top kink club for the LGBT crowd. The young stunner with model looks is never without a partner or two, but lately the thrill has flatlined. When Mesa’s handsome new ER doctor takes care of Terrence after an injury, he wonders if it’s time to ditch the club scene for good. Ever since his long-time partner died, ER doctor Jackson Reed has been content to live alone with his cat, Mr. Nibbles. At thirty-eight, he thinks his chance at love has already come and gone. Just because the paramedic he meets in the ER happens to make his temperature rise, that doesn’t mean he has to give into his fever.

It takes a lot of convincing from Terrence to get Jackson to go out with him for a drink. However, once they’re alone the chemistry is off the charts, and Jackson decides he might take a chance on romance again. But can Jackson trust that the younger stud won’t break his heart?Ultimately, it might be a deranged bomber who tears them apart forever…

Note: Love Emergency is the third novel in the steamy and exciting Uniform Encounters series. It was previously published under the title Lust Emergency with a different publisher. This edition has been revised and re-edited, but the story essentially remains the same. You can expect an insta-lust romance between a carefree paramedic and a more reserved, older ER Doctor, a bit of angst, smoking hot action along with a dose of suspense.