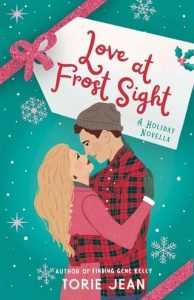 Seth is fine with the friend zone. Well, he would be okay with being gutted every time his best friend, & love of his life, Jenny, swooned at the star quarterback if it wasn’t a constant reminder that it should have been him.
The big guy on campus. Pro scouts.
The girl of his dreams looking his way.
His identity. His future. All ripped away by a freak hit that shattered his knee & his dreams in an instant. Even his high school sweetheart left. So when the quirky bookstore owner offers him a world where that hit never happened, the least a guy can do is humor her.
It’s just a bonus that when he wakes up, the mean girl on campus, who ditched Jenny for a sorority, is his tutor & she fumbles around like some lovestruck, blushing fool whenever he flashes a smile her way.
Jenny is the endgame.
But it wouldn’t be the worst thing in the world if, along the way, he made Madeline Finch beg for him in the stacks of the library, or the locker room, or his bedroom….
In the spirit of giving, & all that jazz, am I right?
Mean Girl Madeline Finch is officially desperate. Her star quarterback boyfriend just dumped her for his tutor & her ex-best friend & in the aftermath, she made a few—or several, who’s to judge here—mistakes.
With the fear of losing the crown she worked tirelessly for, Madeline would do anything for a do-over. So when a bizarre bookstore owner starts yelling about a rewrite and offering her a too-good-to-be-true deal: get some alleged soulmate of hers to fall in love w/ her by Christmas, and she can have ten mins of her life back, who is Madeline to say no?
But when Madeline wakes up in a world ripped straight out of a Christmas display window, as the not-like-other-girls-girl of her nightmares and finds the “soulmate” she has to woo is none other than thorn-in-her-side, Seth Aarons, Madeline may find herself learning a lesson or two.
Like when making a deal w/ a faerie, always read the fine print.
It’s never too late to start becoming a good person. & the most important lesson of all, Seth Aarons has a particularly lovely mouth when he’s not using it for talking.