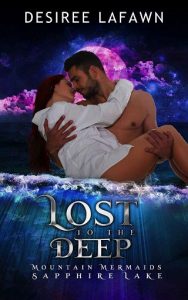 All Jaxxen wanted to do was go back to sleep—forever. But no, his baby brother had to go and break the ancient curse that kept them bound to the lake by finding his mate. Good for him, but Jaxxen had never planned on a happily-ever-after for himself. Since his brother had gone through the trouble of brutally waking him up, Jaxxen might as well surface one last time to meet his new sister and wish them the best. Except he never expected to meet a fiery goddess with the mouth of a seasoned warrior.
No, her flailing fists, and other body parts, were definitely not part of his—make small talk, go back to the bottom of the lake and sleep until the end of time—life plan. And even worse, she’s making claims she knows nothing about. Claims that could have him feeling things he never wanted to feel.
Blaire was tired of waiting. She’d seen the mate mark when she was just a teenager and wasted no time finding out what it meant. She was a mate of the deep. Jaxxen was hers and he had the audacity to tell her, “No thanks” like his word was law? Unacceptable. Even if she could make herself believe she doesn’t need him, she didn’t wait all this time for her prince to come only to take no for an answer from a black-eyed barbarian with a chip on his shoulder.
He could get on board or they could spend eternity fighting about it, because she’d go down to the deep and get him before she let him have his way. She won’t let Jaxxen be lost, because she’d be lost too. And she knew they were meant to find each other.