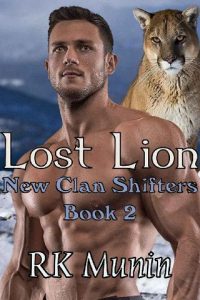 After a sudden and violent turnover of power, New Clan is under scrutiny by the Conclave, the central governing body for all shifters.

Under threat of execution from her old Clan Leader, wolf shifter and author Maeve Walsh escapes and finds her way to New Clan seeking shelter and protection. It’s with great relief she finds sympathetic Clan Leader Steph Garmin. Steph not only accepts her into New Clan but does everything she can to make Maeve feel welcome and safe.

Cyrus McCormick arrives in New Clan territory with very different motives than Maeve. Sent by a governing body fearful of change, his job is to find or manufacture evidence against the leadership of New Clan and see to it that a reversal of power happens, so tyrants are put back in control. Forced into his job as assistant to a Conclave Delegate, Cyrus does his best to mitigate the destruction the cruel Delegate, Phillip Jonas, enjoys causing. Often that involves picking one or two people to be Jonas’ targets. It’s harsh and he hates it, but better several people die than an entire Clan.

But then he meets Maeve and everything changes. The moment he sees her, he knows she’s his mate, and he’s desperate to Heartmate Tie her. But she’s everything the Conclave seeks to eradicate. She has a physical disability and yet the courage to challenge authority. She stood boldly against her old Clan Leader, and it almost got her killed. Given a chance, he knows she’ll try to stand against Jonas and the Conclave to protect New Clan. It would be a last stand none of New Clan will survive because the Conclave is just too powerful.
Cyrus is out of time and options. If he doesn’t act quickly enough, Maeve could be the next shifter “sacrificed” to keep order. But saving her might mean putting himself on the chopping block.