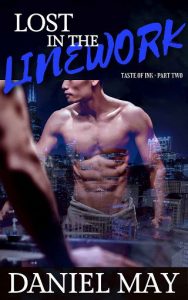 He’s in too deep and unwilling to go back… the only thing more dangerous than choosing between the possessive boyfriend and the cheshire-grinning tattoo artist is making no decision at all.

Trinket met Mini under odd circumstances – Mini the tattoo artist working late, Trinket the customer getting inked to commemorate a two year anniversary with his longterm boyfriend. Their hookup shouldn’t have happened at all, and at least should have lasted that evening and gone no further. Instead, it’s evolving rapidly into a game of chicken Trinket is playing with himself.

Things with boyfriend Siebold ‘Zee’ Li have never been better… or more complicated. Trinket finds himself bolder in the bedroom, but loses his nerve outside of it. His domestic bliss with Zee doesn’t feel like a cage, but Trinket is beginning to see the bars. When Zee’s coworker glances at Trinket’s empty ring finger, Trinket panics. The one he calls to cope is Mini – a man becoming not just side piece, but confidant.

Zee doesn’t know he’s in competition with another man, but he can sense things aren’t right at home. He tries new things in and out of the bedroom – introducing toys, making grand romantic gestures – but his boundary-pushing stands a change of triggering the already unstable Trinket into making things even worse.

Lost in the Linework is the 30k word follow-up to A Taste of Ink, giving readers another taste of the chaos. This book contains cheating, kinky sex, unsafe and risky sexual behavior, and does not end with a HEA/HFN but continues the story leading into part 3.