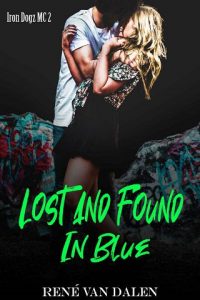 River:
Five years was a long time to grieve. Her heart still ached with loss every single day. The long lonely nights were the worst, but every morning she faced life and survived another day.
The invite to an Iron Dogz MC family braai (barbeque) was unexpected. For the sake of her business she would go, stay for an hour or so then go home. That was the plan at least.
What she hadn’t expected to find was a man who set her heart on fire and wrecked her in bed. For her it was the start of something, for him it was a one-and-done. It left her feeling empty, used and angry.
A shocking threat to her son has her regretting ever setting foot in the Iron Dogz compound. To safeguard him she’s determined to put it in the past. Where it belongs.
But the past has a way of intruding on the present. Turning her well-ordered life into chaos.

Ice:
The family braai to celebrate DC taking Hawk’s patch was the last place he had expected to find a dream. A blue-eyed golden haired dream that set his senses on fire. One night was all he had with her. One night, before he had to end it and watch her walk out of his life.
His past had reared its ugly head and dealing with it would require all his attention.
Doing his duty for his club has never been a problem. The Iron Dogz came first. Always.
Getting close to his ex to uncover threats against the club was difficult. And secrets long hidden threaten the very future he now knew he desired.
Until he receives news that changes everything. It totally guts him but gives him hope.
Hope for a future with his Blue. All he had to do now was convince her to give him a chance.