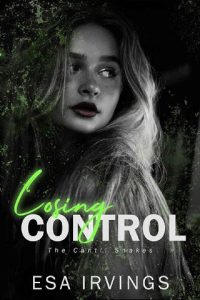 Mykie Vesper, forever a control freak, always knew where she stood when it came to the people in her life. Everything was just as she needed it to be, in tiny boxes that she could understand and file away. After the last month, she even felt that she was beginning to do well in the love department.
That is, until she’s suddenly set off kilter after an important death in the Cantil.
With those she relied on no longer a call away, she believes the only choice she has is to isolate herself until she regains control. However, she realizes there’s only so long she can stay alone before the five men who began worming their way into her heart come knocking at her door.
As she begins to turn to people she never expected and her trust begins to waiver, she is suddenly thrown down a rabbit hole of questions where the memory of her past is suddenly tested.
With the haunting last words of those dead still circling her mind, Mykie begins to question whether she’s in control, or if someone else is pulling the strings.

“Losing Control” is a reverse harem novel featuring a strong-willed, workaholic female who is slightly better at recognizing romance before it smacks her in the face and five amazingly hot guys who can almost forgive her for her cluelessness. This is a slow-burn novel that includes fate-to-black scenes and features gangs and descriptions of violence/blood.