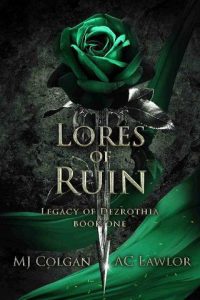 Almost 400 years ago, the usurper took the throne and made one, terrible Lore.
A Lore that would change everything for Dezrothia…
The Heirs
Heirs to the Dezrothian throne, these two high fae princes could not be more different, despite being identical. One craves booze and bedmates, while the other gets off on power and privilege. But when she shows up, they finally have something in common. One has her and the other wants her, but who will win this rebel’s hand?
The General
As the most feared General the King’s horde has ever known, he values duty and honor above all else. When duty takes him on a hunt to the Fading Vale with the King’s golden boy, his brutal, boring existence is turned upside down by a rebel forcing him to choose between desire and duty.
The Rebel
Raised in the dark depths of the Fading Vale, she has only ever known a life of survival. Finding herself captured by her enemies, her worst fears have become her reality. Will she follow her instincts to escape, or sacrifice her safety in favor of a unique opportunity to make a real change in Dezrothia?