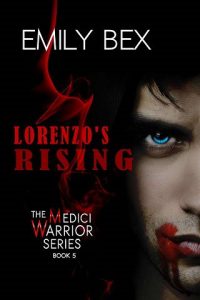 Lorenzo must learn how to someday lead the Medici coven, and become a warrior as powerful as his father. He quickly discovers not everyone’s intentions towards the Medici’s are pure.
Sophia pursues a forbidden love and locks horns with her father, as Natalia prepares for her newly discovered destiny, and stumbles upon Shade’s long buried secret.
The Medici’s take on a new business venture in Italy and run straight into the Mafioso. Lorenzo and Alphie end up in a fatal battle between vampires and mortals.

In classic Emily Bex form, you will be absorbed into the drama that always surrounds the Medici’s. Jaws will drop and…
…someone will die.