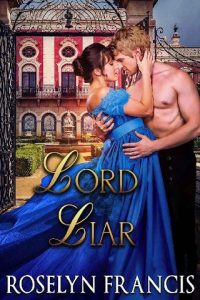 Which is going to hurt more; telling her the truth or living in a lie?

Owen Bradford enjoys his rakish lifestyle. But his life is about to change after his father’s warning. He has just one year to find a wife and spare an heir or his allowance is gone.
But who would marry a man with his reputation?
Juliana Kent is tired of not getting any gentleman’s attention. In her second Season now, she has to secure a husband the soonest possible. After her brother’s death, her future is unsure.
But how to get a suitor if no one ever lays eyes on her?

When Owen saves a lady in distress, he is surprised to discover she is his late friend’s sister.
Maybe a marriage arrangement could save not only her reputation but his allowance too.
But keeping the true reason behind his proposal from Juliana is more difficult than he thought. The closer they get to each other, the worse her disappointment will be if she discovers the truth.

With unexpected danger approaching, Owen’s motive won’t be the only thing threatening Juliana. He may be able to wound her heart but someone else is capable of ending her life…
Their passion will kindle, yet the truth can blow out the fire in an instant…