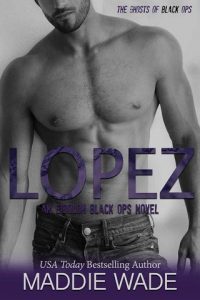 Javier Lopez has a secret—his father is a contract killer.

Despite doing everything in his power to overcome the association with his father, his job at the NSA was shrouded by suspicious looks and doubt. When his mother is killed, he flees the US and takes a job with Eidolon, working as the communications lifeline for the team. For the first time, he’s found a purpose and a brotherhood that fills the empty corners of his life. Yet, he still yearns to uncover the truth about his mother’s death, and his father’s part in it.

As Eidolon finishes up the tour for the Her Majesty the Queen and secrets are revealed, he finds himself face to face with the woman who may hold the answers. From the second he sets eyes on Adeline Lasson, Lopez feels a deep connection to the beauty. As she fights to recover from the coma that almost took her life and regain her strength, the team hunt for the location of her missing daughter, believed to have been kidnapped by Cartel leader Juan Ravelino. When he and Adeline grow closer, he realises that he can’t keep lying about his past because suddenly, she’s become the only future he wants.

Adeline left the life of espionage and subterfuge behind and started a new life for herself and her daughter, away from the dangers that hunted her but that all changed when her child was taken. Clawing her way back from near death, she leans on Javier Lopez. Her attraction for the sexy computer expert grows with each smile and heated look. Addie knows she needs to concentrate on her child but the pull between them is too strong to ignore. When the tension spikes, they find themselves locked in a battle between the past and the future.

They will need to work together to shed the shackles of the past and win the beauty that could be a life together, but first, they have a choice to make—face the truth together or continue living a lie apart.