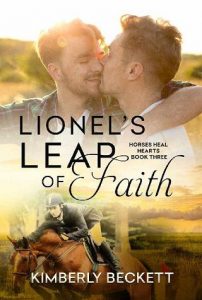 One fateful decision in a moment of weakness destroyed Lionel Hayes’ life as he knew it and led to the death of his longtime partner and lover. At first, he blamed his friend Michael Stafford for his misfortune and sought revenge, but through his work rehabilitating abused horse, and the trust of one special horse, he realized that he had to take responsibility for his actions, and that he and he alone should take the blame. From that day forward, Lionel vowed to restore his image and resume the career that he loved. In the process, he found the horse of a lifetime, Gideon’s Rainbow.
Monty Campbell was a rising star on the international show jumping circuit until he lost his horse to injury. Desperate for a replacement mount, and with the support of the British Equestrian Team, he leaned of Gideon’s Rainbow and knew this horse was for him. To his surprise, the horse’s owner was also a perfect match for him, although the man stubbornly refused to acknowledge it. How could Monty convince Lionel they were meant for each other and would the sinister force that sought to destroy Lionel destroy Monty as well?