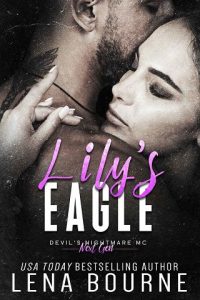 Lily
Being the MC President’s daughter was never going to be an easy life. Not in general, not in love. Especially when the guy meant for you isn’t yours to have. And that’s just one of the many reasons why I’m going away. Back to my ancestral lands, where everything is simple and pure. Where I can do some good.
And I’m not coming back.

Eagle
I loved her since the day I met her. Which was also the day I knew I can never have her. She’s the president’s daughter and I’m a nobody. Less than a nobody. Just one of the many MC orphans. She hates that I joined the club. I had no other choice. I thought time would bring change. A chance for us to be together.
But now she’s leaving. For good, she says. The time just ran out. Turns out the chasm keeping us apart wasn’t as wide as I thought.
Because there’s no way I’m letting her go alone.