Home
contemporary romance
Like a Boss by Annabelle Costa (ePUB) 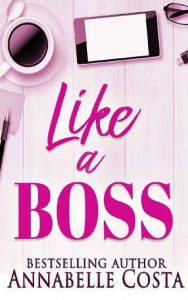 Have you ever met someone and hated them instantly?
For me, that was Luke Thayer.

When I met him freshman year of college, he was as smug as he was rich and gorgeous. A spoiled jerk who would get everything he wanted in life.
Now it’s sixteen years later.
He’s just as obnoxious and handsome as he ever was, and ten times as wealthy. But he’s not the same—a rock climbing accident a decade earlier has landed him in a wheelchair for life.

And I get one other big surprise:
He’s my new boss.
Note:It was previously released as Harvard Hottie and has been significantly revised with a large amount of new content.