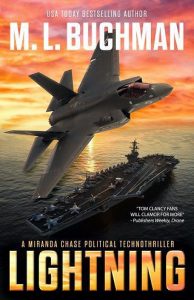 Miranda Chase—the autistic heroine you didn’t expect. Fighting the battles no one else could win.
Revenge? A terrorist attack? Or a declaration of war?
The head of the Senate Armed Services Committee lies dead. The murder weapon? An Air Force Learjet deliberately crashed into his DC hotel room.
Half a world away in the South China Sea, an F-35C Lightning II — America’s newest fighter jet — crashes during landing. It cripples the aircraft supercarrier USS Theodore Roosevelt. An accident? Or China’s next move toward world domination?
Miranda Chase and her NTSB air-crash investigation team are spread thin as they struggle to unravel two horrific crashes at once — and halt a global firestorm before it burns them all.
Worst of all. The next target could be Miranda herself.