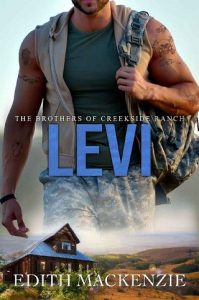 She doesn’t like anything about him. Well, maybe a few things…

English aristocrat Bella Orstwell thought helping get her abusive Russian mafia boyfriend arrested would be the end her troubles. It isn’t. Because even though she’s been whisked off to parts unknown to hide out until the trial, she now has to pretend to be the housekeeper to the Delaney Brothers and nanny to their kid sister. And then there’s Levi, one gorgeous bully of a cowboy tasked with protecting her. He might be in charge of her safety, but if he thinks she’s going to follow his every order without question, he’s in for a rude awakening…
Levi Delaney does not need a babysitting gig. Helping raise his orphaned kid sister and running the ranch with his brothers keeps him plenty busy. But an ex-Navy SEAL never turns down a call from an old friend—which is how he found himself in charge of keeping the annoyingly lovely Bella safe. Now, if only he could find a way to keep her quiet that didn’t involve kissing her—or falling for her…
Bella is shaping up to be a real pain in Levi’s behind, not the least the way his brothers keep falling over themselves when she’s around. But he gave his word that he’d keep her safe and that’s exactly what he plans to do. One small problem, the more she fights him, the more he finds her getting under his skin.
After the trauma of Dmitri, Bella just wants to survive, but is that enough? There’s something about her wounded hero that makes her want to heal him. Not that he wants to let anyone in close enough to do that. But he hasn’t dealt with her before.
Can these polar opposites overcome