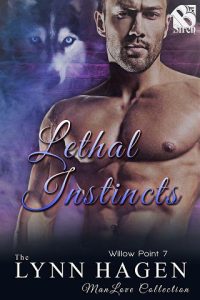 Kamden’s life was so messed up. Not only had he allowed his sister and niece to move in with him, now he had to deal with Katie’s ex-boyfriend and Miranda’s father. The guy was a jerk on good days, Satan on his worst. When Kamden had enough and needed to get away, he found himself at Joe’s Diner. But Kamden hadn’t eaten alone. A tall, dark stranger joined him, changing Kamden’s life forever.

As soon as Kamden sat in the booth behind Nixon’s, he knew he’d found his mate. Unfortunately, explaining his world to Kamden hadn’t gone as smoothly as he’d hoped it would. It was bad enough Nixon killed a rogue vampire, and Kamden had witnessed it. When Nixon arrived late to Kamden’s apartment and discovered his mate barely conscious, Nixon wanted blood. On his search for the culprit, Nixon is blown away when he finds a new kind of evil is in town. Now it was up to Nixon to protect the human who had come to mean everything to him.