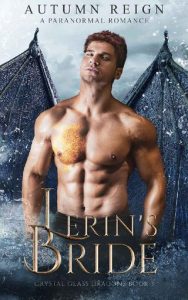 Lerin never wanted the throne. But, with the kingdom on the brink of extinction, he must continue his royal bloodline.

Lerin, a potential heir to the dragon-shifter throne, doesn’t need some stranger complicating his life. Nor does he want to leave the kingdom walls. But when a seer predicts his fated mate—a witch—he must track her down out of duty. But her scent. As he gets closer, it sends him rabid with lust. Can he fight the urge to satiate his carnal desire, to claim her then and there? Every moment away from her he starves. If she knew the truth of why he was really there, she might doubt his kindling love. He’d found the perfect girl, but could he keep her?
Olive yearns for escape from her city life. When she sees a man standing outside her bakery, she’s rocked by an intense, otherworldly attraction. That fiery red hair, those simmering eyes, and those abs that could melt the strongest will… What was she doing, inviting a stranger in? He seems to know her inside out, on primal instinct. The closer he gets, the more it stokes the flames. He claims to be royalty, but can she trust him?