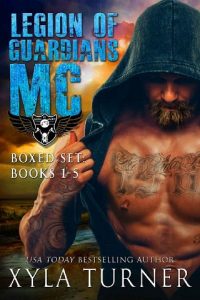 Book 1: Just Ride
“I don’t f*** bikers.” Was Kylie’s parting words to the sexy biker who happened to be the Guardian’s MC President. She just moved back to the town she grew up and her first confrontation with Razor, a biker. He was hot and had the potential of completely invading her life.
She attempts to pump the brakes on his roller coaster, but after her stalker scares some sense into her, she runs to the arms of the Legion of Guardian motorcycle club. Razor tries to steer clear of the young vixen, but he can’t help his pull towards her.
How can he keep his creed with his brothers, the town and get his woman?

Book 2: Let’s Ride
After one night together and a misunderstanding almost four years ago leaves Shay and Bronx not wanting to have anything to do with each other or so they think! Once, Shay’s sex buddy wears out his welcome, and Bronx learns about the arrangement, all of the shit hits the fan.
A run-in with another MC, since Shay’s cousin’s trouble, found its way into Manor puts the Bronx in a position to help the woman he has dreamt of having for the last four years. The attempt they make at exploring their unrequited attraction is challenged when the full truth is revealed, and old mistakes come back to haunt them.
Let’s Ride is a book filled with excitement including the return of Lori, which completely shocks the small town of Manor and Dessy taking on an unexpected member of the Guardians.

Book 3: Just Right
Lori had to go away and regroup, only to return to Manor where her life was turned upside down by one sexy but off-limits biker.
Connor Apollo Locklear.
She had it all figured out but then Apollo decided that he wanted to make amends and everything that Lori had planned went out of the window.
Apollo didn’t have anything to offer anyone. His Guardian brothers were the only thing he had and no woman, especially Lori, deserved to deal with his mess. She had her issues, but Apollo knew them well. He set out to make amends but when that didn’t work; Apollo resorted to desperate measures.

Book 4: Just Dream
Dessy is trying to start over in Manor with the help of her cousin, Shay. Love has consumed the small town but the man she wants, won’t give her the time of day. They had one encounter but he won’t budge and give her a chance, so she’s left him alone for good. She doesn’t need him and she surely won’t chase him.
Bear is an old-school biker who wants nothing to do with the wide-eyed, young woman who seems to have her eyes set on him and only him. It rattled him, that she’d even give him the time of day, but he has his codes, his rules, and his kink. She can’t handle that, and he’ll never find out.
So he thought.

Book 5: Dream Ride
Shiz & Avery met due to a case of mistaken identity. She ran over Shiz’s beloved bike with her 4×4 truck in retribution for a club terrorizing her brother. Shiz did not take that too well, and after their initial confrontation, he realized there was more to her story.
The Guardians needed to step in and Shiz did what the great men before him had done. Fell for her.
Hard.
However, their worlds were so different neither of them was sure if the other would fit.