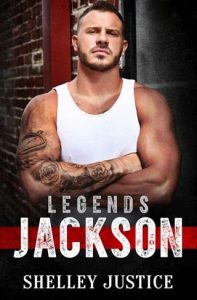 REAGAN
Reagan Bell lives in a world of mystery and murder, all woven in her imagination. Her career as a crime novelist is pushing her toward success, but her life is derailed with the news her father is fighting for his life. Reagan is forced into the world of English Barlowe and quickly learns her father has secrets that belong more in fiction than the real world. His career as the former CIA operative Legend has danger lurking around every corner, threatening those he holds dear, including Reagan and the group of adopted boys she never knew existed.

JACKSON
Jackson Moore leads the new generation of Legends — boys rescued from dangerous circumstances and raised to become vigilantes. Their skills come in handy when helping those in need. Now that danger has struck close to home, they’ll face their toughest case yet, finding the ones responsible for almost killing the man who raised them.
But with English in a coma, Jackson is faced with more questions than answers — including why his hero would keep his daughter a secret and why would English give his power of attorney to the daughter who disowned him instead of the boys who carried on his legacy.