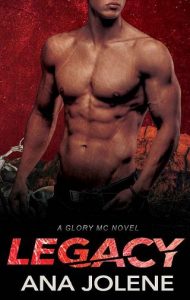 After turning her back on the club a year ago, Fallon Connelly returns to Glory MC, asking for the club’s assistance when her best friend goes missing after a night on the town. The club is surprised to see the Legacy again, but they won’t allow Newt’s daughter to fall into harm’s way on this dangerous mission. Except Fallon’s fiery personality won’t allow her back down that easily. She devises her own plan to search for her friend and has asked Glory MC’s prospect, Angel Diaz, to come with her.
Angel can’t seem to get his last encounter with Fallon out of his head. The problem is, Fallon doesn’t recognize him now that he bears the marks of his torture on his skin. In helping Fallon, Angel will severs his ties to the club, but the loyal prospect never gives up on what he wants—and what he wants is the woman he’s never been able to forget.
When it becomes apparent that more is at stake than her friend’s life, Fallon and Angel realize too late that they have more to lose than they could have ever imagined. But will Glory MC come to save them from the danger they’ve gotten themselves into or will the merciless club leave them to fend for themselves?