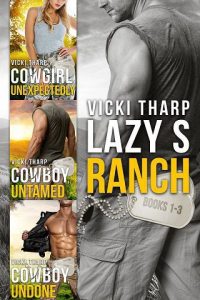 Cowgirl, Unexpectedly
Settling down isn’t an option…
…not when her demons refuse to die.

Since returning from Iraq, veteran Mackenzie Parish has tried to find a way back to herself.
Out of cash, she hires on at a Wyoming ranch. The only problem? Riding a horse is much harder than riding a Harley. But her new bunkmate, the former bull riding champion Hank Nash, is just what she needs to take her mind off her saddle sores.
Estranged from his daughter, Hank has a lot to make up for, but he intends to convince Mac she should stay until then.
Unfortunately, even blue skies and miles of open land may not be enough to soothe Mac’s restless soul.
Or mute the constant call of the road.
No one gets through life unscathed, and Hank can’t fathom what Mac has survived. It will take time, patience, and love to help her through.
But when deadly trouble comes to the Lazy S, will Mac hit the road, or will she choose the man who’s helped mend her shattered soul?

Sydney Teller has a lot to prove…
To the horse industry, to herself, and to the man who thinks she’s nothing but trouble. All she needs is a chance.
Deployments to Iraq taught Bryan “Boomer” Wilcox to be wary. And Sydney’s tarnished family reputation makes him doubt she has what it takes to become the Lazy S Ranch’s horse trainer.
Though, it seems Sydney is determined to prove him wrong…
…about so many things.
But Bryan hasn’t escaped the military without physical scars. And despite their attraction and budding relationship, it’s Bryan’s emotional wounds that have Sydney worried.
When foul play threatens the ranch—and their lives—will Bryan discover he’s the hero he’s always been, or will his demons be stronger than their love?

Cowboy, Undone
PREVIOUSLY PUBLISHED AS HOT ON THE TRAIL

A second chance at first love.
All Jenna Nash ever wanted was her equine therapy program…
… and Quinn Powell.
At least she has her program. One out of two isn’t bad.
Except, when tragedy strikes the Lazy S, forcing Quinn back to the ranch, Jenna’s program may get closed down before it gets started.
Jenna wants to save the program.

Quinn wants answers…
… and back into the cockpit after a possible career-ending injury.
Now they must work together to find the truth. But the truth is uglier and more dangerous than either one of them imagined.
Even if they can put their pasts behind them, they have more to fear than losing their hearts…
… they could lose their lives.