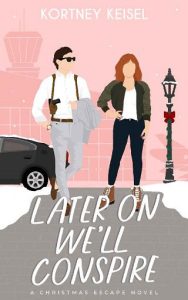 Everyone loves a Christmas surprise––just not when it’s a spy in disguise.

Lacee:
“I’ll be home for Christmas” sounded like an easy plan, but somehow it’s turned into Mission Impossible thanks to the snowstorm that’s grounded every flight. Now I’m stuck sharing a rental car with a stranger.
A very handsome stranger.
A stranger who always seems to be in the right place at the right time and whose knife skills go way beyond carving the Christmas ham.
Thankfully, he’s one of the good guys I think. Since we’ve met, he’s done nothing but protect me from one close call after another. But if he’s not the bad guy, then who is? And why am I being hunted down?
Now, getting home in time for Christmas is the least of my worries. I just want to get home alive––and hopefully not lose my heart to my mysterious James Bond travel buddy in the process.