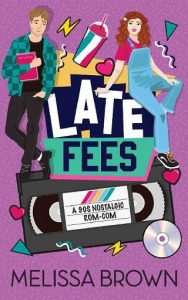 The year is 1996 and Tilly Hamilton, is making big changes in her life. The former prom queen who followed her boyfriend to the state school of his choice only to be dumped a few months into her first semester, has now decided to do what’s best for her…and her alone. She’s transferred to her dream school, moved into an apartment and gotten a part-time job at Spotlight Video. But just as things are looking up, he walks through the door–the boy she never thought she’d see again; her very first love.
Wyatt Johansen never thought he’d see Tilly ever again. Once his family left the Midwest, he’d tried to forget the girl he’d reluctantly left behind his junior year of high school. And he’d be lying if he said his choice of college wasn’t partly due to it being her dream school. But, after months had passed without ever seeing her on campus, he figured it was never going to happen. That is, until he and some friends walked into Spotlight Video to rent a movie. He sees Tilly and his world comes to a screeching halt—like someone pressed ‘pause’ on the VCR. And right then and there, Wyatt knows that he’ll stop at nothing to get her back. He just hopes it’s not too late.