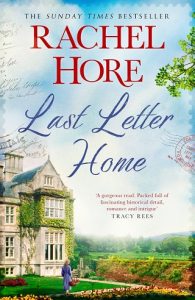 On holiday with friends, young historian Briony Andrews becomes fascinated with a wartime story of a ruined villa in the hills behind Naples. There is a family connection: her grandfather had been a British soldier during the Italian campaign of 1943 in that very area. Handed a bundle of letters that were found after the war, Briony sets off to trace the fate of their sender, Sarah Bailey.

In 1939, Sarah returns with her mother and sister from India, in mourning, to take up residence in the Norfolk village of Westbury. There she forms a firm friendship with Paul Hartmann, a young German who has found sanctuary in the local manor house, Westbury Hall. With the outbreak of war, conflicts of loyalty in Westbury deepen.

When, 70 years later, Briony begins to uncover Sarah and Paul’s story, she encounters resentments and secrets still tightly guarded. What happened long ago in the villa in the shadow of Vesuvius, she suspects, still has the power to give terrible pain …