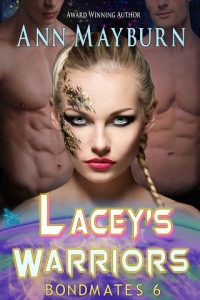 Kidnapped from Earth by alien slavers, Lacey had to fight her way to freedom in an inter-galactic gladiator match against the Hive, a fearsome race of psychopaths bent on destroying everything in their path. After defeating the Hive in battle, all she wants to do is return to Earth and her young daughter. But the Universe has other plans.

When Kadothian Warrior Gwarnon was young, he was told by his sadistic, manipulative mother that his Matriarch had died. His blood brother, Chel, had always insisted that she was alive, but Gwarnon had long ago given up hope. When he finds out through a twist of fate that his Matriarch is indeed alive, he is elated. At least at first. Lacey wants nothing to do with them, but Gwarnon and Chel are determined to show her that staying in the Bel’Tan Galaxy and being loved by them is her destiny.

Lacey will have to find a way to bring her worlds together, while protecting both her men and her family from an unseen enemy that is determined to destroy everything she holds dear.

Author’s note; It is HIGHLY suggested you read Roxy’s Warriors and Tara’s Warriors first, as there is a slight time overlap with all three books.