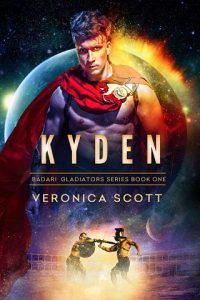 Kyden is the top ranked gladiator in the Five Systems but he’s hardly there by choice. Unscrupulous guards faked his death in the lab where he was created and sold him into slavery in the galaxy’s hinterlands. He has no idea where his home is or how many years have passed since he was condemned to a life of endless combat. Kill or be killed is the rule and a Badari never gives up. He’ll fight to stay alive until the Badari goddess sees fit to decree his death.

Elara Vasclavian is the daughter of a senator, as far removed from the life of a gladiator as a noblewoman can be until through the machinations of a political enemy, she ends up in terrible jeopardy. Abducted and given to a group of drunken gladiators for their amusement the night before the games, Elara vows to put up a fight but there’s no real hope of saving herself.

Until Kyden steps in, responding to the goddess’s commandment to protect those who are smaller and weaker.
And discovers she’s his fated mate.

Rescued, Elara returns to her life of privilege but she can’t forget the man who saved her life. The gulf between their places in the Five Systems is unbridgeable, no matter how much Kyden longs for even a glimpse of her in the arena audience. No matter how much she feels the pull to be by his side. As matters stand, they cannot be together…
Or can they?

KYDEN is the first book in a new series, spun off from my ongoing Badari Warriors series. Kyden is a Generation Five Badari whereas the main characters in the long running series are from a later time and are Generation Eight. This new series stands alone and you don’t have to have read any of the other books to enjoy this one. I couldn’t resist the temptation to tell a few other Badari stories, set in the galaxy’s Hinterlands, and who can resist gladiators?