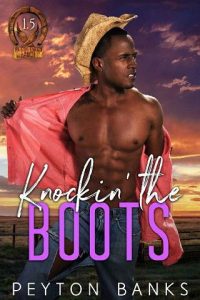 She was his best friend’s sister and should have been off-limits.

Rashad Mays was a ranch hand on the Blazing Eagle Ranch. He had grown up in Shady Springs and had no intention of leaving. This was his home, and he was ready to settle down. Only the woman that captured his eye was the sister of his best friend, Nate.

There were unspoken rules between friends when it came to their little sisters–don’t touch.
Yani Polk was not like other women. She didn’t chase after cowboys for a casual roll in the hay. She was a lady. Sexy, curvy, successful, and currently the star of his late-night fantasies.

He’d thought he would be able to push her out of his mind, but when she came strolling onto the ranch, he couldn’t resist. Her smile and the gentle sway of her hips called to him.
The sizzling attraction was too great to resist. Rashad did the unthinkable. He broke the rules.
Yani was the woman for him, and he was willing to fight to prove it.