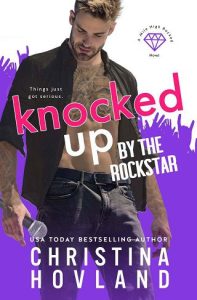 The only thing music publicist Courtney Lincoln dislikes more than knock-off sugary breakfast cereal is Dimefront’s lead singer—Brennan “Bax” Baxter. So when she discovers she’s pregnant following one teeny, tiny, mind-blowing morning with her nemesis, her world tumbles upside down.
Dimefront is on the rocks. Again. Bax is ready to move on. But following the implosion of his engagement, he makes a slip-up that ties him to Courtney as unlikely co-parents. He doesn’t like Courtney. Doesn’t care for how she’s able to see straight through the façade he’s painstakingly curated. But he’s always wanted a family and he’s being offered that chance.
Now the band is mending fences, there’s a baby on the way, and feelings start getting tangled. Maybe Bax isn’t really such a jerk? Perhaps Courtney could be the woman of his dreams? Or, maybe, just maybe, they were right all along…