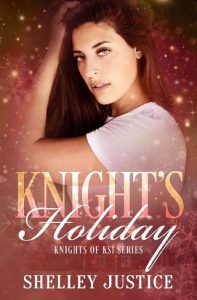 She’s an enigma even to those she loves. But protecting herself comes with a price.

Isobel Garcia has found a place to belong among her work family at Knight Security and Investigations. She would lay down her life for any of them, but when it comes to opening herself up to them, she chooses to remain a mystery. They don’t know what she does with her personal time or where she disappears to when she’s on holiday. It makes for a lonely life, but it’s a price she’s willing to pay to protect herself from hurt.
He’s dedicated his life to caring for others, but when family is involved, he’ll risk everything.
Egan O’Connor lives and breathes his work as a doctor in a small neighborhood clinic, and only one reason would drag him away from the job he loves – family. His brother Teague is missing, and that means trouble. He doesn’t know what kind, but he owes Teague his life. Now he’s on the hunt for his brother, but the hunt is more dangerous than he bargained for.
Christmas is a happy occasion for most, but being at the mercy of a snowstorm and an unknown threat makes for a more dangerous holiday.
A car accident upsets Isobel’s plan for a solitary Christmas. Her decision to take in an injured Egan during a snowstorm was meant as a good deed. But someone wants him dead, and she is his only means to escape alive. Isobel thinks she’s rescuing him, but when it comes to matters of the heart, she is the one who needs rescuing…and Egan wants to be the man who does it.