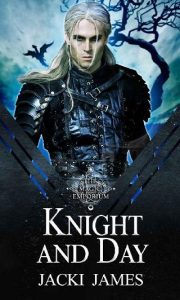 Theodore Knight has a curious nature. Ever since he was a child, he’s loved books that are full of danger and adventure. In real life, he’s a simple bookstore owner. But in his imagination, he’s a hero who goes on great quests to save the princess, or in his case, the prince, from evil dragons.
Until one day, real life starts to look a lot like his imaginary world. . . and the fate of an entire kingdom rests on his shoulders. The world is more magical than he ever thought, and he will have to learn to accept the impossible as possible, if he and Samuel are to succeed.
Samuel Day had never journeyed to the human realm, and he sure didn’t mean to get stuck there. That said, he’s found it all incredibly fascinating. Especially Theodore, the adorable human who holds a piece of the puzzle necessary to stop an evil immortal and save the magic realm known as Evorea. His loyalty is to his king, but it doesn’t take long for Theodore to become equally important.
They come from different realms and are as different as night and day, but together they have everything they need to save Evorea from ruin. They just have to find their way back there.