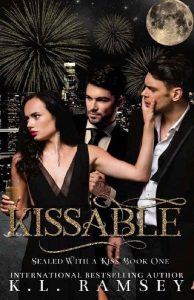 Dean Chantelle wanted his best friend’s wife—there he said it. He wasn’t proud of the fact and he would never tell his best friend about his feelings—ever. Case Richards was like a brother to him. They had known each other since grade school—almost as long as they had known Rylee. She blew into their lives in high school and knocked them both on their asses, but Case ultimately got the girl.
Rylee broke Case’s heart when they all went away to college, telling him that she needed to see the world and have her freedom, and Dean was right there by his buddy’s side trying to help him through it. He convinced Case to take a road trip with him, to see Rylee and hopefully get the two of them back together, but his friend chickened out at the last minute and left him standing on Rylee’s doorstep. That was the night he betrayed his best friend, finally making the girl he’d always wanted his. He had his one perfect night with her and Case would never need to find out because if he did, it would destroy their friendship. But more than that, it would destroy Case and Rylee’s marriage and Dean wouldn’t let that happen.