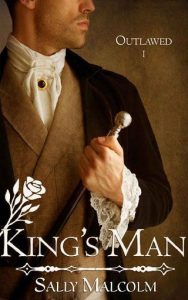 Had there been no war, Sam Hutchinson and Nate Tanner would have lived their lives together as intimate friends, and secret lovers. But when the revolution convulsed America, it threw them down on opposite sides of history…

Five years later, Sam is a Loyalist refugee in London, penniless, bitter, and scrambling to survive amid the city’s shadowy underworld. It’s a far cry from his respectable life as a Rhode Island lawyer, and the last person he wants to witness his ruin is Nate Tanner— the man he once loved, the man who betrayed him.

The man he can’t forgive.
Now an agent of the Continental Congress, Nate is in London on the trail of a traitor threatening America’s hard-won freedom. But the secret mission of his heart is quite different. Nate longs to find Sam Hutchinson—the man he still loves, the man he lost to the war.

The man he can’t forget.
When their lives unexpectedly collide, Sam and Nate are thrown together on a dangerous mission. And despite everything that still divides them, old passions begin to stir… Can they seize this second chance at love, or is their tangled past too painful to forgive?