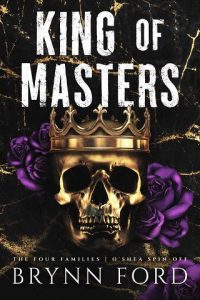 He’s a king without a queen. She’s a proudly independent woman. He’s going to make her the reluctant queen of his criminal empire…whether she wants it or not.

Murphy is the born leader of the O’Shea family, one of four families in a conglomerate of traffickers. They make their living stealing women and selling them to new masters…masters among which, he is a king. When he acquires a new slave meant to be his plaything, he finds he has no interest in her easy submission. He wants a challenge. He wants a woman who will stand by his side and make him stronger. He doesn’t want a pet…he wants a wife.

Stella is the epitome of an independent woman. She’s tough, single, and runs her own business. On a chance encounter, she meets Murphy, and their instant physical chemistry is undeniable. A one-night stand turns into a long-distance affair of the heart, except Stella doesn’t know the real Murphy O’Shea. She’s falling for him, but she doesn’t know he’s a ruthless criminal.

Murphy is meant to have an arranged marriage in five years, only now he’s met Stella. He wants her…and he’s going to take her.
He’s the king of masters and she’ll be made his reluctant queen.
This steamy dark romance is a spin-off from the Four Families trilogy.