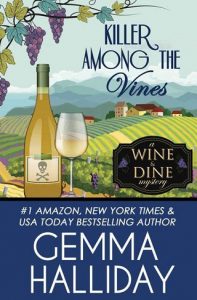 Emmy Oak’s family run winery has been in the headlines one too many times and for all the wrong reasons. Which is why she’s decided to hire a night security guard, Bill Buckley, to keep an eye on the place. Only when Buckley calls her in a panic about a tripped alarm, Emmy again fears trouble at Oak Valley Vineyards. A fear that is realized in the worst way when Emmy rushes home to find her security guard dead among the blooming grape vines.

Was it poachers? Trespassers? An interrupted would-be burglar? Or was the attack less random and much more personal…

Emmy’s sorta-maybe boyfriend Detective Christopher Grant worries the killer might have been after her. But as Emmy learns more about her late employee, she realizes Buckley had far more enemies than she. Before becoming a security guard, Buckley was a police officer…who was caught taking bribes to look the other way. A scandal that illuminates a whole host of suspects, including an angry ex-wife, a former partner with a grudge, and a convicted madame turned cookie purveyor with revenge on the mind. Not to mention the surly teenage son of Buckley’s live-in girlfriend, who would do anything to get rid of his almost-stepdad. But when Emmy finds out Detective Grant also has his own connection to the dead man, she suddenly wonders what else Grant may be hiding about his past. Can Emmy ferret out the killer among the vines… before they come looking for another victim?