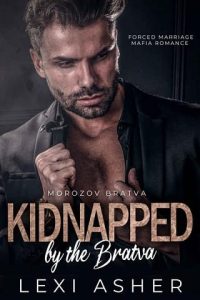 He says he needs an heir, and I’m carrying it.
He says he’ll claim me as his mafia bride even though I don’t want to.
The Bratva doesn’t accept no. The Bratva takes what it wants.
And so the next thing I know, he’s got me blindfolded in the back of a van.

His fingers on my voluptuous curves make me forget that I don’t want to marry him.
His kiss on my bruised lips makes me forget that I was trying to escape.
He has taken all I have but given me a pregnant belly.
Will his ruthless hands break me for good?

Or will they heal my most vulnerable of places?

The Russian Bratva of Miami has three rules: solve problems with violence, paint the streets with blood, and break hearts at will. They’re not nice, they’re not gentle, and they don’t compromise. But behind closed doors, they’ll show you what ruthless love really means.