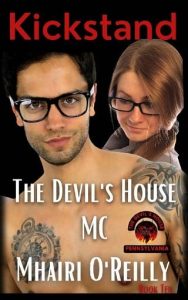 Kickstand
As Treasurer and Computer Wizard for the Devil’s House, MC Seth ‘Kickstand’ Richards spends his time protecting the club’s money and online security. And he never had a problem doing that until another hacker hired by a rival club gave him a run for his money, challenging him like never before. So, imagine his surprise when he finally finds the skilled hacker known as the ‘Nightingale’ and discovers it’s a twenty-one-year-old woman named Jaycee Cromer. After watching her for months to get her location, she is brought in by the club to be questioned. For some reason, Kickstand feels he needs to protect Jaycee; why he doesn’t know? Jaycee is not his usual type with her plain, bookish looks. But, it’s there an attraction and a need that he hasn’t felt before, and when her life is threatened, Kickstand will be the one to protect Jaycee with his life.

Jaycee
Jaycee Cromer is known as “Nightingale” on the internet underground. Jaycee had always had mad skills in coding, and hacking used to be a fun hobby and a way to challenge herself. But when her gambling father borrows money from a dangerous biker club, his life is threatened if she doesn’t become their hacker to infiltrate a rival club, her father will be killed. Jaycee thought this would be an easy job, only to find out she was going up against someone whose skills challenged her at every turn until The Devil’s House MC found her and brought her to their clubhouse. There she meets her rival hacker, ‘Kickstand,’ with whom she instantly feels a connection, an attraction. But Jaycee doesn’t kid herself, and she’s not what men like Kickstand want in a woman. Instead, Kickstand felt a duty toward Jaycee, nothing more. At least, that’s what she thought.