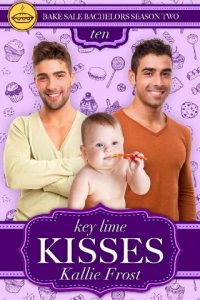 After having his heart broken, dating is the last thing Alpha Weston wants to do. When his sister asks him to bake his fabulous Key Lime Pie for her, he happily obliges – it’s not as if an innocent pie can be part of one of his sister’s crazy plans to get him dating again. Little does he know while he’s busy baking, his sister is indeed cooking up a scheme to bring an omega into his life.

Omega Shea isn’t interested in dating, but he’s happy to support the Children’s Hospital that saved his nephew’s life. He would rather just make a donation without bidding on an alpha, but when his brother shows up, Shea feels like he has to go all in. After a disastrous date with a complete jerk, who couldn’t possibly have baked such a delicious pie, Shea bumps into Weston whose date didn’t even show up.

Even though the two hit it off right away, a series of mishaps, surprise puppies, and an unexpected pregnancy put their relationship to the test before it even starts. But when Weston bakes a Key Lime Pie for Shea, they realize their love may just have been meant to be…