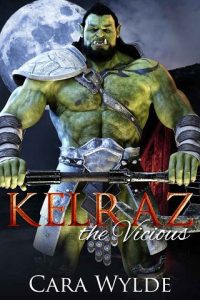 When the orcs invaded the human dimension, no one could stop them. War raged for years, and now the monstrous beasts have agreed to peace on two conditions: one, the human scientists must rebuild the machine that brought them to this world; and two, they must be provided with fertile brides to bear them orc babies.
Silvie has always believed in the saying, “be the change you want to see in the world”. That’s why she volunteers to become a tribute and goes to one of the first institutes for orc brides to open in North America. Then the institute is attacked, and an orc horde saves the young women from a terrible fate. The orc captain must be rewarded, and Silvie ends up being his prize. She’s always known she would be mated to an orc. She just thought she’d have more time…

Kelraz the Vicious is a monster on the battlefield. He spills his enemies’ blood without remorse, but that doesn’t mean he doesn’t have a code of honor. There’s one thing he won’t stand for – innocent females and children being hurt. On his way to the mountains, he hears the screams of the human females, and swoops in to save them. As a reward, he can pick one of them. He picks Silvie, the curvy, green-eyed beauty who doesn’t flinch at the sight of blood.